The Astronauts is a live-action Nickelodeon show about five kids who accidentally rocketed themselves into space. A teaser trailer was shown during Kids' Choice Awards 2020: Celebrate Together. The series premiered its first two episodes, "Countdown" and "Day 1" on November 13, 2020 on Nickelodeon.

Creator Daniel Knauf stated that while the series is intended as children's programming, it explores some bleak material that can be described as "if 'Apollo 13' happened with children." Furthermore, the series is part of a new kind of programming that Nickelodeon is exploring which could appeal to a broader audience.[1] He also stated that when first meeting with Imagine, he told them from the beginning that the series was not intended to be "Kids Shot Into Space And Hijinks Ensue," that he would not do that show, and that the series is a throwback to many of kinds of shows made in the '50s and '60s.[2]

A group of five children sneak into the rocket Odyssey II, excited about the idea of going into space. When the rocket unexpectedly blasts off the second they step on-board, they must use all their wits and skills to survive the adventure, while also contending with the vessel's malfunctioning AI, Matilda.

In addition to the show's award-winning production staff, directors of episodes include Dean Israelite (who also serves as one of the executive producers), Jonathan Frakes (Star Trek: The Next Generation, Star Trek: Picard) and Marcus Stokes (Criminal Minds, The Flash). Scientific accuracy was ensured by consultant Stephen Petranek, an award-winning journalist and technology forecaster.[2] The members of the show's cast also had the opportunity to ask questions of a real astronaut in preparation for their roles.[3] 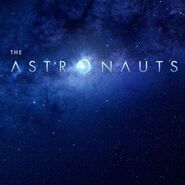 Tour the Set of The Astronauts! 👩‍🚀 - Launching November 13th on Nickelodeon

The Astronauts 👩‍🚀 Behind the Scenes + First Look! - Nickelodeon

Community content is available under CC-BY-SA unless otherwise noted.
Advertisement